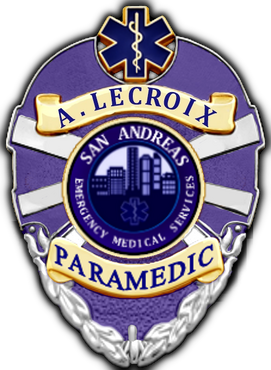 Addison LaCroix is a Nurse at Pillbox Hill Medical Center and a paramedic with the San Andreas Emergency Medical Services.

Addison LaCroix was born & raised in Savannah, GA to Alexandre LaCroix & Eloa LaCroix, and is the middle child with two siblings.

Addison was born with a silver spoon in her mouth. Alex LaCroix, a French plastic surgeon with multiple very successful practices in Georgia, raised his family with an iron fist. Much to Addison & her brothers dismay, her father's reputation and standing in the community overwhelmed his desire to create a nurturing home for his children. Addison, a social butterfly by nature, made friends everywhere she went as a child -- however, if her friends held no benefit to the family image, her father made sure she never played with them again.

Play dates with other children became business opportunities, and Addison was trained to play nice, regardless of her true feelings. Most of the children she befriended were spoiled & found enjoyment in bullying others. This continued on all the way through high school, where Addison started to adopt her friends toxic traits. She became a stereotypical mean-girl, picking on those she saw beneath her and not worthy of her time. Her attitude only increased after her father arranged for Addison to get a rhinoplasty at the young age of 16, despite her wishes to remain natural.

Though Addison showed interest in art, her father viewed it as a waste of time and effort. She was directed to join multiple different clubs and activities that would make her shine on a piece of paper. Class president, cheer-leading Captain, Prom Queen, anything you could think of in a cliche High School princess, she succeeded at obtaining.

Boys came & went over the years, but none ever stayed. Either she was matched based on financial opportunity, or they merely chased her for her looks; with all her daddy issues, she never really saw anything wrong with this. Love was something she'd heard of, but never experienced first hand. Letting go was easy.

Addison was pushed to a career in medicine. It was her father's wish for her to become a surgeon. She obliged, starting college with every intention to bend to her fathers plan. Unfortunately for Alex, being away from home made it easier for her to rebel. Joining a sorority, Addison partied, & she partied hard. Drugs were never on the menu, but she coped with alcohol. To this day, whenever struggling, Addison turns to alcohol or relentless shopping to numb herself back into her emotionless mold.

As time went on, away from the control of her family, she was free to make her own choices about her life path -- and she did. She dropped out of med school and took the quicker course, getting her paramedic license and immediately snatching up a job opportunity on a fixed wing medical aircraft. The job took her across the country, state to state, far away from the family she'd been disowned from.

One morning, Addison checked her e-mails. A job opportunity in San Andreas. Apparently a couple medics had passed in the recent months and they were struggling to fill their shifts. Addison sent off her resume from her hotel room in Maui; she'd never been to San Andreas before, and the benefits were decent. The debts she'd stacked from her shopping habits were starting to make life difficult, and the sign on bonus was enough to take a good chunk of that debt off... or pay for a new Gucci handbag.