The Bolingbroke Four is a chaotic prison gang founded by multiple prisoners that were sentenced to life in prison.

The Bolingbroke Four is best known as the infamous prison gang that escaped prison with the help of a mysterious man called "Mr. Imugi". Boris Nightly, the self-proclaimed leader of the group, died due to being pushed off the FLEECA bank by Gunnar Mason. This was after Boris gave Mason an ultimatum: push him off the building or get shot in the head. Leroy Campbell and Dash Armstrong are both still at large, while Rusty Dawns was later captured and sentenced to life in prison for unrelated crimes. They are responsible for the death of Zachary Grendel and the attempted murder of Mason, who they blew up while on top of a tanker truck in retaliation for Boris' death.

Since the incident involving their escape and Boris' death, the group has been relatively inactive with the exception of some individual efforts by the group members.

The first meetup outside of prison 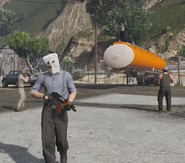