"The Tornado" is a vigilante who rides around on bicycles stopping petty crime and keeping the city of Los Santos safe from criminals.

The Tornado grew up in Los Santos and as a child saw lots of crime in the city. He decided that he wanted to rectify this and donned a mask and all black clothes. The first crime he stopped was a speeding car, to which he hit the car with a bat and told the man to slow down. Ever since then, he has adopted the bat as his signature weapon and his catchphrase: "You've just been winded" (pronounced whinded).

The Tornado's father has been a big point of contention. He has expressed very obvious daddy-issues and looks for a father figure in anyone, including even Trooper TJ Mack. After once claiming that he was "banging Tornado's mom" on a traffic stop, Trooper Mack was constantly asked by the Tornado to be his father. He was shut down not more than a few days later at Mission Row when Mack said he would never be his father and that he was never with his mother. Since then, the Tornado has not found another father figure.

Tornado met Puma, who is really Augustus Stitzler, after getting a text from Skeeter Fontaine. He told his friend Lily Sky to call the police if he didn't respond in 15 minutes because he thought it was sketchy. Once they met, they discussed plans and decided that their group would be called Pounado!, or as Shaggy Dankweed referred to it as, a shitstorm. Tornado then met back up with Lily after that and went on with their adventures.

From a cab ride, Tornado met Lily Sky and they immediately hit it off together. Lily and Tornado went on a bunch of adventures together, during one of the adventures Lily drove Tornado's bike into a lake. Lily and Tornado went to the impound lot after William Ding drove her car into the ocean. Tornado mumbled something during one of their conversations, which Lily didn't catch and bugged him about for a while. Eventually, he decided to tell her while they were talking on a mountain. He said that she was "future wife material" before running away down the hill. After chasing him down, Lily told him that he was "future wife material" too. Tornado then yelled at her for calling him a "wife". 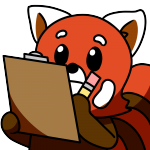