2 Close range buckshots to her chest

Jackie Steins was a member of The Grove Street Family and manager of the Vanilla Unicorn. She moved to Los Santos from Las Venturas, originally from Liberty City. She was known for her aggression and short temper.

Jackie was born in South Slopes Broker, Liberty City. She was raised by her mother, Heather Steins, and father, Anthony Capone. Her father was a wealthy, aggressive drug kingpin, and did his best to keep his business life from his family. He was extremely controlling, had her home schooled and would always have someone keeping an eye on her. The life style she was forced into by her father kept her out of a lot of social activities and gave her a very limited frame of reference on common things.

Her parents were going to be married, but not before her mother found out about a short affair her father had with a woman named Lilith Finklesteen. Her mother broke up with her father, taking Jackie and leaving their home, Jackie was 13 years old. They moved into a small apartment on the other side of Broker where her mother had to work two jobs to keep them afloat.

Jackie was left very angry from the whole situation, and the way her father raised her left her hating him. Her mother wasn't able to afford schooling for Jackie, and while she was out working two jobs, Jackie would often be out getting into trouble. She'd frequently be caught stealing and vandalizing things. When Jackie was 15, her mother was diagnosed with Breast Cancer. While her mother continued to try to work through it, Jackie tried picking up some work to help as well... never being able to land a legitimate job however, she began selling drugs.

Jackie would start doing more over the next few years, small time robberies, stealing, lookout for crews, even prostitution for a short time when she turned 18. Jackie's mom eventually fell too ill to continue to work, and the jobs Jackie began doing grew more violent, but paid far more. Jackie had earned a bit of reputation with a few of the local gangs who started sliding her ways to earn cash. She lived like this until her mother passed away when she was 22. Before she died, she told Jackie everything, about who her father really was. Jackie was heartbroken and furious. She started to drink heavily, hurt people, and go full in with the work she did for gangs.

After a year working as a hired gun for local gangs in Liberty City, Jackie had been to jail a few times, and made plenty of friends and enemies. One night, Jackie packed her essentials into a duffel bag, went to her favorite bar and drank until she was blacked out. She stumbled out to a bus stop where she'd take the first bus to wherever it went. She'd wake up the next morning on a bus stop in Chicago. She'd start over again doing all she knew how to, robbing people, earning enough of a reputation for local gangs and crews to start sliding her jobs. She worked in Chicago for a little while before again, drunkenly getting on the first bus out of town.

The next place she found herself in was Las Venturas. Starting over again the same as she would before, robbing people and earning a rep. Jackie would end up actually staying in Las Venturas for a couple years, enjoying the kind of work she got and the nightlife of the city. Jackie worked with a lot of different crews, but prominently ended up working with the Red Gecko Tong and the Mountain Cloud Boys, Triads out of The Four Dragons Hotel & Casino. Jackie picked up a pretty bad cocaine habit while living here, getting so bad with it that at one point she actually overdosed while in a club. She took a step back from using after that, but definitely still carried the habit. Jackie did a lot of work here, and its probably where she got most of her experience. However, she eventually would move on as she always would.

Jackie would wake up from another drunken night, finding herself on a bench in a bus depot in Los Santos, San Andreas. Jackie rented a motel, purchased a Tampa from a used car lot, and went to work robbing everyone she could find. Within 3 days she already had a huge reputation, everybody in the city talking about "The Tampa Bandit", and fearing the sight of any Tampa driving down the street. One night after visiting The Monarch, she was picked up by Marco Romano and Amber Finklesteen. They took her out into the hills, and extended an offer to work with The Grove Street Family doing some side jobs. Jackie continued robbing people, for a bit while doing some things on the side for the GSF.

One day, Amber Finklesteen told her to meet her on a dock on the Alamo Sea. Amber put an AK to Jackie's head and forced her to tell her all about her past. She had learned from Alexandria Bennett while looking into her father, that Jackie was listed as Anthony Capone's daughter as well. They learned that they were both actual sisters, and Jackie's life completely changed.

Jackie moved in with her sister Amber who immediately setup meetings with enemies Jackie had made, telling them to back off... which they all complied to. Jackie slowly had to adjust to actually having other people in her life, her sister Amber and all of Grove Street. One day, Amber was shot in a shootout with cops, Warren Bautista and Donny Donnerson being shot and arrested and Raith Robinson and Tony Reeves shortly after being arrested for a separate crime. Jackie, Chung Fei, and Ben Jones stole an ambulance to get medical supplies for a doctor to try and help patch up Amber, unfortunately, the plan failed and Amber had to go to Pillbox Hospital where she was arrested for the shooting as well.

With almost all of Grove Street locked up in prison for shootings, Jackie, Ben, and Chung held down the Southside until everyone got out. Everyday, the three of them would wake up and patrol the streets for hours. Jackie got extremely involved with Grove during this, and afterwords started to slowly be pulled in with many more months of work to follow. Ben Jones had became Jackie's best friend during all this, only to be shot dead by police months later.

Donny Donnerson purchased the Bahama Mamas and had Jackie help him run it as the club's manager. It really helped Jackie keep her mind off things, and she poured an extreme amount of time and effort into the club, hiring people and getting the club up and running. Jackie ran the club with very down to earth and cutthroat tactics, going after the Vanilla Unicorn specifically due to her hatred of Nancy Flutterbottom. Eventually, they were actually able to buy the Vanilla Unicorn out from Nancy.

Eventually, Jackie found herself and Grove Street in a war with Donny Donnerson who had tried to leave Grove, allied himself with Logan Marshall, Chucky Cheese Gang, and the Los Santos Vagos, and raided the Grove warehouse of weapons. During the war, Amber had been on vacation in Hawaii. She was upset with Jackie for wanting to go after Alexandria Bennett due to her suspected involvement. When Amber came home, she was kidnapped by Logan's crew. Jackie, Raith Robinson, and Oliver Walker. While Raith was on the phone with Logan's crew, Jackie managed to actually find where they had her, a large castle like mansion surrounded by a wall. Her rolling by on accident spooked them, and they shot Amber. Jackie slammed into a police car by mistake while spinning around to charge into the building's compound to find her sister. Jackie and Raith ran in with police chasing them, armed to the teeth and found Amber laying on the ground. The cops who rushed in after them quickly dropped what they were doing to help save Amber, taking her to the hospital. Jackie was angry at herself and felt like she got her sister killed, and she was scared that she wouldn't make it. While sitting in the hospital, she spotted Alex walk in. When Jackie got the opportunity, she took Alex's phone and made her get in her car. She held Alex in the house next to her place in the Southside. The police quickly caught on, kicking down her door the next day and arresting her for the kidnapping and freeing Alex. Jackie was in prison for some time, when she got out, her sister and the rest of Grove were there to pick her up. The war went on for a while, but eventually ended in Donny being shot, Logan's crew getting locked up, CCG being wiped out, and Vagos fleeing.

Sometime after the war, the police were antagonizing Grove Street in the Southside. Warren Bautista and Chung Fei told Jackie to go kill one of the cops when she got an opportunity. Jackie was more than willing, she grabbed her MPX, hopped in her skyline, and went hunting. She'd end up spotting Trooper Mason Kennedy at the hardware store in the Southside. She pulled up to him, hopped out of her car, and shot him down. She sped out of there and stashed the car, meeting up with the rest of Grove on the Eastside. She told them that she got the job done, and they jumped her into The Grove Street Family. 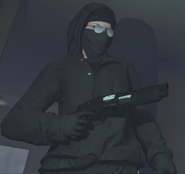