Jason Doyle is a former SASP Senior Trooper, Army veteran, a former sniper, and formerly a BCSO Deputy. He has a passion for enforcing the law. Additionally, Doyle is best friends with his ex-partner Eli Thompson and is currently married to state therapist Avery Jenkins to after a they privately signed the papers at the court house. Doyle paid a homeless person to be the witness.

Jason Doyle, aka "Deputy Doyle", is seen as a rising star in the San Andreas State Police Command force. Deputy Doyle has received extensive training in all aspects of law enforcement, including SWAT and K9 (which he runs with his police dog Duke). Fellow Officers respect him greatly for his police acumen, civilians respect him for his congeniality, ladies love him for his charm and criminals fear him for his ruthlessness. Doyle is well known for his mellow and relaxed composition which compliments the more "cut-throat" composition of his partner Trooper Thompson.

In spite of his drinking problems, Doyle is a respected member of the Los Santos community. He is close personal friends with several members of the BCSO, SASP and LSPD, most notably his former partner Trooper Eli Thompson and Sheriff Deputy Jonathan Murdock, and fellow officers look up to Trooper Doyle as a mentor.

On July 7th, 2017, Doyle was involved in a shootout with armed robbers at Paleto Bay bank which left him with multiple gunshot wounds. Doyle was rushed to the hospital and was in critical condition for several days. While recovering in the hospital Trooper Doyle's father passed away from an emotional stress-induced heart attack.

Because of the grief from losing his father and the PTSD from the Paleto Bank Shooting, post-recovery life for Trooper Doyle was anything but easy. Doyle developed a dependency on alcohol and his relationship with his wife became strained, causing her to eventually leave him. Doyle's PTSD and depression prevented him from being able to swiftly return to patrol duty and was mandated by the SASP to see State Therapist Avery Jenkins. Jenkins was then required to verify if and when Doyle could return to work. During his recovery, the Trooper grew a close and affectionate connection to his therapist Ms. Avery Jenkins, and upon completing his treatment began dating her.

As of November 6, 2017 Doyle stepped down from his Trooper position and is now a Deputy for the Blaine County Sheriff's Office.

On February 27, 2018 Doyle was reinstated as a State Trooper after the Blaine County Sheriff's Office merged with the Los Santos Police Department to form the new San Andreas State Police. Trooper Doyle refused to wear his hat until Trooper Thompson returns from his leave of absence.

Trooper Doyle has joined Trooper Thompson in stepping away from the department, and both have stated they do not currently plan on returning.

Avery and Doyle sharing their first kiss.
Fanart by SixtenArt 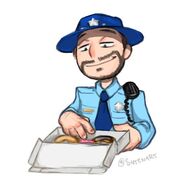 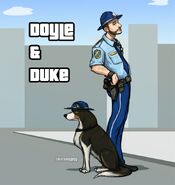 Doyle and Duke on patrol.
Fanart by SixtenArt
Community content is available under CC-BY-SA unless otherwise noted.
Advertisement