Jerry Curl is a former Jazz legend and current hobo. He loves beans and vodka, has a weakness for women, and is an ordained minister. He is smooth, soulful and often nostalgic of the 1970's. Current member of The Four Winds.

Jerry grew up poor and was raised in the heart of South Los Santos on Grove Street. As a child, he'd often spend his nights ruminating about becoming a famous Saxophone legend and would dream of performing at the Maze Bank Arena. According to Jerry, this dream came true and he spent several years touring with musicians such as James Brown. When his close friend and bodyguard Craig got Jerry hooked on cocaine, Jerry became physically unable to play the saxophone thus ending his career as a musician. This began Jerry down his dark downward spiral into poverty and homelessness.

It is currently unknown how exactly Jerry came into homelessness (has something to do with alcohol and women). Presently Jerry is a crucial member of the Hobo Guild The Four Winds, a group of hobos that are sworn to protect the homeless areas of Los Santos. Jerry currently holds the position of "Southbound Hobo" and is the incumbent protector of the Sexy Cyclone South. He is famous for his bean recipe and also his signature Hobo Maps, which he produces for the rest of the members of The Four Winds.

Jerry's relationship with Officer Tony Andrews, has been an interesting one. When they first met, Jerry tried to steal Andrews then girlfriend (now wife) Torah Hart, eventually talking her into coming up onto his roof, and eating his famous beans, which Tony took offense to, though months later they would be married, the ceremony ministered by none other than Jerry Curl himself, who Tony Andrews personally asked for the job. Even though he had tried to steal Torah (now Andrews) away in the past, he seemed genuinely happy for his friend, who he had bonded with over time, each of them taking the other on a type of 'ride along', and cried drunkenly at the wedding. 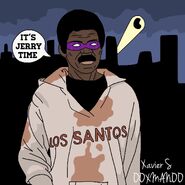