"I am required to tell you I have two registered lethal weapons: my gun and my thighs."
―Khloe Dazzler

Khloe Leaves is a combative criminal who is interested in maintaining a gambling ring out of one of the Los Santos hotels and starting a boat repair and tour business. She strived to be the catalyst for a shake-up of the status quo in the criminal world of Los Santos, but that was never achieved.

Growing up, Khloe was a part of a very religiously conservative family. Her parents disapproved of her self-expression, so she often used make-up and face paint as a creative outlet. Her parents greatly disliked this, and since then, Khloe has not had a positive relationship with them. Unlike Khloe, her sister was more reserved and what her parents hoped she would be.

As a part of Khloe's past, she was a mud wrestler. She claims to have "award-winning thighs" and be a two-time world champion. Although, she had to retire due to a broken right leg and no longer competes in mud wrestling. Her thighs have apparently killed a man before, one of her mudwrestling friends, so she is required to have them registered as lethal weapons with the state of San Andreas.

Khloe, ever since becoming active in the city, has gained a small reputation for being a 'snitch'. This is only because she started seeing Johnny Dazzler, captain of the SASP. However, after becoming close friends with Harry Brown and Dimitri Barkov, she began building her reputation and making other connections with Mav Doretto's friends. Khloe and Harry started hosting small craps games in back rooms, the first of which with Dequan Mathis and Boris Kalashnikov, however, she had a brief falling out with Harry after he set her aside for Chief's interests. She briefly returned to working with Harry again on setting up house funds for gambling. She planned to buy out a motel, with the financial assistance of Dazzler, where she could rent out rooms while also hosting backroom gambling games.

Since then, this hotel plan has been put on the back-burner in favor of a boat rental, tour, and repair business. Khloe has expressed less of an interest in "reseating" the criminal world and more in peacefully taking her own "slice of the pie". She plans to open "Dazzling Encounters" with her husband Dazzler and to run some illegal operations with that as a cover.

Unbeknownst to Khloe, she has been blacklisted by a few criminal organizations and gangs due to her shooting a member of The Tribe named Joseph Costa after he threatened to kill her boyfriend at the time. Despite this, Mav Doretto and his group, 101, have displayed an interest to help her and Dazzler rework the criminal underground's current structure and rebalance the power. Mav has given her and Dazzler a multitude of information about the criminal world and her enemies as a sign of good faith. Luca Gambino and his associates had also expressed a similar interest in Khloe on the gambling side.

Khloe, along with Bernie Lowmax and Tidus Martel, started their own gang with Dazzler assisting in the shadows. Khloe named it 1% in reference to her and Dazzler's goal of becoming rich and a tattoo she has on the back of her left arm. They mostly dealt with underhanded and secretive operations to keep the gang's name protected, as was the mindset of Khloe at the time, but they soon moved to more open and aggressive moves that ended up leaving Khloe in a coma and all of the members kidnapped and tortured at one point.

Over the course of her involvement with the gangs of Los Santos, Khloe has incurred debts to a multitude of people including Bob Coolidge for shooting him accidentally, Mav Doretto for general shop payments, Alexis Freeman for her investments in Khloe, and others. After Alexis, not receiving her $20k back from Khloe, was in danger of losing her dream house, Mav became increasingly angry at Khloe and began making plans to have her dealt with despite their 'alliance'. Because of this, Mav, Baada Ka, and Harry Brown united to form a plan to possibly kill or at least intimidate her into paying. However, Khloe soon went into a coma and was unable to pay. During that time, Bernie Lowmax paid off the $20k debt to Alexis, which prevented Mav from acting against her for the time being.

Clash with the Tribe[]

On May 14th, 2018 Khloe made plans to kidnap Baada Ka and bring him to Zeus to be dealt with once and for all. She invited him to a fake gambling game and used the paid appearance of Cliff Hanger to give him a sense of false security. When he arrived, she and Bernie Lowmax forced him out of his truck at gunpoint. While standing there, a motorcycle drove by quickly and shot Khloe down, blowing up Baada Ka's truck in the process and downing him. Chung Fei, one of Baada's friends, picked her up in his truck in an attempt to kidnap her, but she quickly lost consciousness. Chung's mediocre efforts to revive her failed, and after a prolonged period, he took her to Sandy Medical. Things quickly took a turn for the worst when Medic Thomas showed up to assist and was immediately held up for his morphine by WD-40 and Byrone Tiggum. Dazzler, while responding to the call, was stabbed by WD-40, who was in turn shot by Bernie. The medic handed over his morphine, then rushed both Khloe and Dazzler down into the city for better care. Khloe was placed into a medically induced coma at Crusade Medical while Dazzler was sent to Pillbox Medical for better care and recovery. At the same time, Baada Ka also went into a brief coma.

Khloe awoke from this coma on June 1st, 2018 and was released from the hospital under the care of Johnny. Since then, she has stayed in relative hiding for fear of being kidnapped or killed by Baada Ka and The Tribe. Subsequently, she has also been fired from her job at Street Dreams.

Khloe and Dazzler at Street Dreams 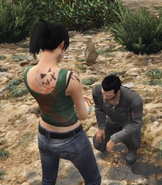