Kiki Chanel (born June 9, 1983) is a Los Santos based businesswoman, socialite, television and media personality, philanthropist, and fashion icon. She is the owner of Kiki's Organic Clothing, a Ponsonby's subsidiary, and is famous for her bombastic personality, and potential possession by a demonic spirit.

Not much is known about Kiki Chanel's early life. Other than her relationship with her father were strained, as seen in a demonic rage. It is unknown how she became "possessed" by this demonic creature, and some speculate it is a form of Dissociative Identity Disorder (DID) which may reaffirm suspicions of childhood abuse.

Kiki's birth gender remains disputed, she herself claims her masculine appearance is due to heavy steroid abuse when she was a professional body builder. Others claim to have seen her "lady glue stick."

Kiki is a self-labeled fashionista, pop icon, philanthropist, lover of peach Bellinis and Justin Timberlake. She is known for forming stalker-esque crushes on unfortunate victims such as Dannie Slater and Dequan Mathis. She made threats to cover them in "lady glue" and "lay her eggs down [their] throats." While most others find the comments off putting, Kiki seems to view it as simple compliments and plan making. She was also known to have very strong intercostal muscles, able to "suction cup herself to a wall."

Kiki's alternative side is seen when angered or passionate. Painkillers such as Vicodin and Morphine cause her to react unusually, changing the pitch of her vocal chords, first into a male range, then into a demonic range, and then the demon takes over her whole body. The so-called demons that possess Kiki were once successfully exorcised by Francis Sinclair, only for it to return shortly after.

In addition to her many "talents", Kiki is also the owner and lead designer of a Ponsonbys' subsidiary Kiki's Organic Clothing (K.O.C.), a company founded on the principle of only using 100% vegan grain-fed hemp. Her inspiration was for, "delicious, femilicious, chique, organique, au naturel fashion."

After the engagement of Dannie Slater and Jessie Wolfhart, Kiki's mental health began deteriorating. In early January, Kiki began having episodes of complete disassociation. Dressing as Jessie in an attempt to fool the still recovering Dannie into thinking she was actually Jessie Wolfhart, donning the trademark backward cap, bob hair cut, low cut T-shirt and shorts. Kiki also applied unusual makeup, appearing pale with dark eyes and insisted she was actually Jessie Slater. Sometimes referring to herself as Kiki Slater.

On January 10th, 2018, Kiki once again had another episode. Carjacking an Obey 9F near Rockford Hills before driving to Del Perro. Kiki then stabbed an elderly man in a parking lot on Prosperity Street, and Blvd. Del Perro for "looking at her" before fleeing in the stolen car. Police responding to the stabbing saw the stolen 9F and attempted to pull it over before Kiki fled at a high rate of speed through Rockford Hills striking a vehicle and crashing through the Rockford Hills LTA staion. Kiki continued through Vinewood before going airborne at almost 200MPH and sliding into a retaining wall on Poplar Street. The vehicle sliding on the catch fence slowed it down before it hit another low retaining wall, knocking her unconscious.

Police on the scene ended up charging her with outstanding warrants from the previous few weeks of activity, and the additional charges. During her questioning she insisted she was Jessie Slater, laughing uncontrollably, screaming though the demon, and was put on a violent offenders mental health evaluation.

Eventually after much time served, and a full examination by state therapists Jay Parker, and Zoey Lyrais and was released after 220 months served on her 180 month sentence.

Tragedy on The Tip of the D

On January 12th, 2018, Kiki saw on Twitter Danny's announcement that they needed wedding planning help and an officiator. Kiki snapped, had another episode. Again dressed as "Jessie Slater" she offered to meet up with Wolfhart at the end of the Del Perro Pier, and kidnapped Jessie at gunpoint before taking her phone and tying her up in the Paleto Forest near the sawmill. Kiki returned to the city to then kidnap Reverend Edward Skye and Dannie Slater, driving the two of them to the Vinewood Sign and climbing the D attempting to force the marriage. Dannie tweeted for help and Wolfhart, a taxi, Dan Dorfman and a WVT-TV news crew, and a SecuroServ car responded.

The SecuroServ team responded and climbed to the tip of the D. During the welfare check found something to be off, but nothing immediately dangerous. On the way back down the hillside, passed Wolfhart on her way back up and turned around. Jessie then climbed from the base of the D to the tip, and was accosted by Kiki who was still holding the reverend and Dannie at gun point as they were forcibly married. After the union, Kiki shot Reverend Skye point blank in the face and he fell the 4 storeys to the back of the base of the D. Jessie then drew her own firearm as Kiki said she was going to murder the both of them, and shot Kiki in the back 3 times, as she fell almost 5 stories to the ground below.

There was a notable lack of first responders that evening, and she was transported to Pillbox Medical by the SecuroServe team with Zeke, Jessie, Dannie and the rest of the responding crews in tow. She was transferred to the ICU and her status is unknown.

On February 28, 2018, Kiki had returned to Los Santos, stating that she did not remember what had happened and all she remembered was waking up in a swamp with leaches on her "hoo-ha." She believed excessive consumption of peyote may have been the cause of her lapse of memory. 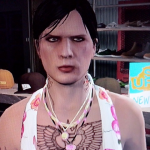