The City of Los Santos

The Los Santos Police Department (LSPD) is the police department of the City of Los Santos, San Andreas, and the largest municipal police force in the state. The agency has primary responsibilities in law enforcement and investigation within Los Santos County.

As of February 27th, 2018, the LSPD and BCSO have been defunded. As a result, all law enforcement is handled by the new San Andreas State Police, compiled of all former LSPD and BCSO LEOs.

On July 1, 2019 the SASP split back up into the LSPD, BCSO, and San Andreas Highway Patrol, under the Department of Public Safety.

On July 26, 2020, the LSPD, BCSO, and SAHP were once again merged back to reform a more streamlined SASP.

You can also keep up-to-date with the police, EMS & Justice force on FamilyRP here.

The LSPD was established in 1889, nearly a hundred years after Los Santos was founded. Current headquarters is Mission Row Police Station, located near downtown Los Santos.

The primary way to reach an officer is by dialing 911 or 311. The LSPD's primary jurisdiction is inside the City of Los Santos itself, but its jurisdiction will often stretch out into Blaine County as well. 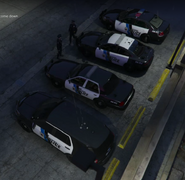