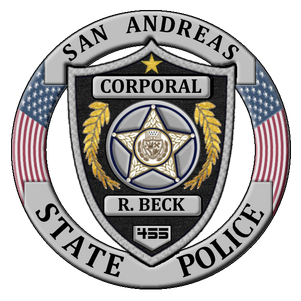 Robert Beck was a Corporal of the San Andreas State Police and former colonel of the San Andreas Highway Patrol. He was friendly, eager to teach, and the definition of following the law. Despite his mild attitude, he was good at driving and was quick to respond.

Robert was a long-time LEO who started his law enforcement career in the United Kingdom where he began his career with the Metropolitan Police and served as a Constable for 5 years. During his time with the Met Police, he served on several different teams ranging from answering 999 (UK version of 911) on an emergency response team before moving to a community policing team and finishing up on a traffic team (CHP style). Shortly after moving to traffic Robert was promoted to a specialist force that covered the UK railway infrastructure as a sergeant. After serving there for a number of years in that post, Robert met his then-current partner who wished to emigrate to the US. They both finally took the leap and began to make plans to up and move overseas.

He started to make contact with different agencies within the state to find that the only department that was taking transfers was the Los Santos Police Department. He took the risk and put in his application request in to transfer out of the LCPD to the LSPD. After a few months of sending forms and qualification paperwork back and forth to the LSPD HR team, he was offered an interview. The Interview seemed to go well and the 2 interviewing officers swapped stories and compared notes on their policing backgrounds. Robert was successfully hired to the LSPD.

After visiting several places they choose to start their new life in Liberty City where Robert successfully applied to the Liberty City Police; he served there for 4 years as a patrolman out of the 55th Precinct. Things didn’t go as smoothly as Robert hoped in Liberty City and, during a difficult few months towards the end of his service with the LCPD, he and his long-term partner split up. At this point, Robert chose to look for somewhere new where he could start to rebuild his life. He and his partner had been on holiday to the State of San Andreas and had liked what they had seen.

After looking at several different neighborhoods within Los Santos and not finding anywhere that really felt like home, he started to look north into Blaine County. After driving just 20 minutes along Great Ocean Highway, Robert came across a lovely little town called Paleto. After looking at a couple of houses he found the area down by the coast and found what he thought was a delightful house that overlooked the sea. Having put in an offer and it was accepted the house required a little work so while that was going on Rob is currently living in a cheap ass hotel in the middle of Los Santos.