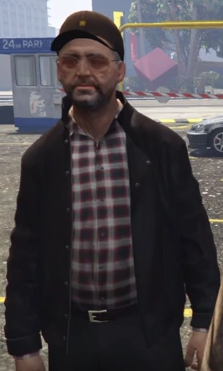 "The Secret to good hunting.... is bait"

Richard Oakes was your friendly neighbourhood serial killer. He was a quiet old man who enjoyed nature walks, hated the big city, but loved the outdoors and wildlife. He ran a business which took people on nature excursions named "Dick's Backdoor Adventures".

Richard was a lonely recluse with a dark and painful past that gradually revealed itself. He was an only child and was isolated from other children during his adolescence. His mother died during childbirth, and his father regularly abused Richard as he blamed him for her death.

To fit his solitary lifestyle, Richard was a career log trucker with a love for fishing, birds, and the outdoors. He enjoyed sharing these passions with others by taking people on hikes near his sawmill located deep in Paleto Forest, but not everyone made it out alive.

Richard was both menacing and inconspicuous, and possibly suffered from antisocial personality disorder (ASPD). Switched between being wise and kindhearted to being violent and malevolent at the drop of a hat.

Had a special hatred for youth who showed disrespect and arrogance, and these types of people typically made his "list". Became more and more unraveled with each passing day as his desire to "scratch his itch" became more and more overwhelming.

Richards death occurred during the attempted murder of his last victim, Abdul Al-Rahim. The police officer who responded to the scene, officer Tony Andrews, gunned Richard down during an intense standoff.

Isolated his victims by taking them on "nature tours" deep in the wilderness of the Paleto Forest. He then used a razor sharp hatchet to both incapacitate and mutilate his victims.

TheFamilyRP is a GTA V roleplay server that is focused on high quality/realistic roleplay. The server is currently under construction, and as of now using Koil's code as a base for further development. The Family RP is on a temporary server, but the Developers are working on the permanent whitelist server, as well as a server for the public. [For more information visit the Family RP website]

Retrieved from "https://thefamilyrp.fandom.com/wiki/Test?oldid=4357"
Community content is available under CC-BY-SA unless otherwise noted.