Maternal-Grandmother (Not currently in Los Santos)

Advantages: Look for one thing and do it to the end, no one can shake his determination.

Yuen is a Chinese. Born in a city in the northeast of mainland China. His mother is an employee of a certain company. The information of his father is not yet known. The only information currently known is that he disappeared shortly after Yuen was born and left a large sum of money. Where did his father go? Nobody knows.

Because his mother was too busy at work, he was entrusted to raise him in the maternal grandmother's home, but the maternal grandmother was already old and weak, and had neglected to discipline Yuen most of the time, so he often mingled with the surrounding gangsters since childhood. Not only was he absent from class, truant, he often fought, and even learned to steal a car. Later, he was expelled from school because he injured his classmates many times in school. Yuen, who has integrated into the society, is even more unscrupulous and domineering.

Until one day he commits a big mistake, provokes people who shouldn’t be offended, and has to leave this place. There are rumors that it is because: There was a large-scale clash between Yuen’s gang and another gang. One person was beaten and disabled. Unfortunately, this person was the son of the most notorious local gangster. Therefore, the gang did not hesitate to spend a lot of money to hire killers. Come to assassinate Yuen. But in his own words: "I am tired of the boring life here and decided to go out for a walk." But he was always hesitant, making a difficult choice between Los Santos and Liberty City. At this time, His maternalgrandmother told him: she hope Yuen can go to Los Santos, Because she had hoped since she was a child that she would be able to live there one day.It's out of reach for her. Therefore, he decided to leave for Los Santos. He may go there to start his new criminal career, or he may be going to complete a dream that maternalgrandmother has never completed. But who would know?

On the way, he suddenly remembered that his foreign language level was ridiculously poor, but the ship had already started. . . .“Fuck！”

After a long journey, Yuen finally arrived in Los Santos after drifting for dozens of hours at sea. And commissioned a passerby to take a photo for myself.Yuen wandered around the big city without a goal. He didn't know what he should do next. Seeing that the sky was already dark, he decided to find a place to live. As a result, when Yuen was passing Forum Drive, he encountered three gangsters in green clothes who wanted to rob Yuen. Unexpectedly, this kind of trifling is already commonplace for Yuen who is full of scorn, and Yuen does it all by himself, get rid of these three people easily.

Because there was no vehicle, Yuen had to walk to find a nearby hotel, but he found a shop selling cars on the corner. He noticed the row of bicycles placed in the corner and stared at it for a long time...Take out only a small amount of money left on him, he bought a reasonable bicycle BMX, and paid the fee in tears. Riding a bike to shuttle between the city and the streets wantonly. Occasionally raise your middle finger to people on both sides of the street...

Yuen came to an area where many Chinese lived. Facing the sunset, listening to the conversations between other Chinese around his and his relatives, he had a feeling of returning home, a nice and cozy feeling, and he wanted time to freeze. But the sound from his stomach pulled him back to reality. Yuen touched his pocket and realized that he didn't have enough money to support himself. When he wanted to live in this strange big city, Yuen felt inexplicable pressure. I wanted to let go of the previous things and change the habit of being a rogue, but he didn't know what he could do because, so he had to engage in some dangerous industries to earn money to support himself. He first went to the weapon shop to buy a dagger, and walked out of the shop with a sharp knife in his hand, This knife feels very smooth. “I have a great plan in my mind！”

Yuen knew that as a qualified criminal, he would not run around on a bicycle, so he secretly calculated that he planned to steal a four-door sedan and use it as the first car in his criminal career! Taking advantage of the evening, Yuen walked in various blocks, looking for vehicles that could be stolen. However, there were unforeseen circumstances, and there was a pouring rain without going too far. He had to go to a grocery store nearby to escape the heavy rain. "Unlucky!" After waiting until the rain stopped, Yuen found a sedan that could be used. It took a lot of effort to pry open the door. After a while, he saw the red and blue flashing in the rear.  "Shit! " There is no doubt that Yuen was arrested by the police...

Soon after, YuenLong decided to do some legitimate business. First, he bought a four-door sedan "Albany Emperor" at a broken car shop in the central part, and then registered as an Uber Driver. This is his favorite car, he thinks this car is very homey, sitting in it seems to be back home. Use this to feed yourself. It can be said that he has officially bid farewell to the days of doing nothing.

Arrived in Los Santos for the first time, unable to see what the future looks like 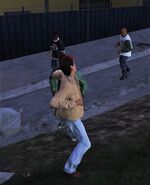 The first bicycle purchased by Yuen 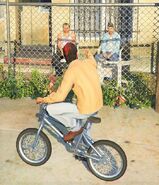 Watch the sunset in a Chinese residential area

Arrested for stealing a car

Mr. Yuen and his favorite car