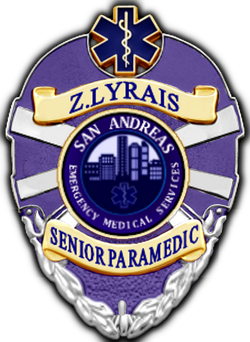 Zoey Lyrais is a former Head Therapist of the Parsons Rehabilitation Center with the State of San Andreas assigned to speak with civilians who have a mental illness and those who seek counseling. She is widely known for her calm personality, being kidnapped, her love for bike rides and friendzoning people.

Zoey was born in Vancouver, where she lived with her parents and older sister. She came to Los Santos to study to become a paramedic. To pay for her tuition at the University of San Andreas, Los Santos, she started a taxi service called Zoe's Taxi Service. This taxi service rivaled Reginald Bigglesby's Saucy Taxi, who tried to buy her out multiple times. Zoe's Taxi Service was known as one of the few taxi's to actually follow the law, which also led to the taxi being rear-ended a lot by crazy locals.

In her free time, she would organize nature tour bike rides, which often ended up with multiple people being injured. Contrary to allegations, no fatalities have been reported from these bike rides. However, due to her job as a therapist and EMT, as well as a rumored police investigation, she has seized organizing the bikes rides.

During this time Zoey came known for her calm personality and ability to defuse situations, often breaking up fights and preventing the Leanbois from lighting people on fire by throwing herself in the middle of these altercations. Even though she's asexual, her personality and perceived innocence have made her a desired bachelorette by both men and women, who she consistently friendzones. Her personality combined with her urge to help everyone often puts her in the vulnerable positions and makes her an easy target, which has resulted in 12 kidnappings.

While Zoey waited for the Emergency Medical Services applications to open up, she had a run-in with police where she and Darrelle Baitor found Lang Buddha on the side of Great Ocean Highway next to a burnt up car. Due to a misunderstanding, Zoey ended up being charged with Conspiracy to Traffic Marijuana, staining her perfect record and preventing her from becoming an EMT.

Luckily for Zoey Pastor Gory took a liking to her and decided took take her under his wing at the Parsons Rehabilitation Clinic. There she trained her to become a therapist, with her first evaluation being Pastor Gory's insane brother, Jonathan Gory. Together with Avery Jenkins she worked under Pastor Gory to provide counseling and evaluate the mentally ill. Due to their outstanding work and dedication, Pastor Gory rewarded both Zoey and Avery with 49% stakes in Parsons while also revealing that he was a major crime lord.. Not much later, Pastor Gory vanished and Zoey became acting head of Parsons.

After a government takeover, Zoey's record was wiped and she could apply to EMS again. She went on a few ride-alongs, but that abruptly ended when she was kidnapped from Zim Pontes' EMS Tahoe by Francis Sinclair and Breshawnda, who used Ryan Dewitt, a good friend, and patient at the Clinic, to get her out of the vehicle. They took her up to the dam and forced her to step into the basin, planning to cleanse her as they believed she was the source of all evil in the city. However, due to the tracking device in her EMS outfit, the LSPD managed to locate and save her, killing Francis and incarcerating Breshawnda. Zoey ceased her EMS training and focused fully on her Therapist job. However, due to work at the Clinic slowing down, Zoey applied and got accepted to the EMS, where she now is employed as a Commander of the San Andreas EMS while still doing her job at the Clinic.

Due to the increased risk that comes with the therapist job, Zoey has hired security and another therapist Jay Parker, who she groomed to be her successor as the head of Parsons, but after a few months of working together, he grew disillusioned with the job and applied to the SASP. Zoey then hired Ezekiel Zehring, who started out as security and was being trained as therapist before leaving the city.

On March 19th 2019, Zoey was attacked in prison by Sebastian Martinson while conducting a mental evaluation on him. As a result of this attack, Zoey suffered ICP and a fractured skull, sending her into a medically induced coma. When she awoke from this coma, her speech was severely inhibited due to brain trauma, which kept her from working both of her jobs. When Zoey left the hospital, she finally decided to move out of the house Jay and she shared due to a cooled relationship between the two and Jay's girlfriend Monika Barker moving in with him. She currently presides at William McBride's house, who she has been in a relationship with since December and was there to pick her up when she was released from the hospital on April 2nd. Zoey returned to active EMS duty on April 7th.